SCourtesy ofRett Heald T. ALBANS — Overlooking downtown St. Albans and sitting on a bright, green lawn is a building people pass every day. Some may notice it, others may prefer not to. It’s a place people only enter when they’re seeking comfort- and for the past century- thousands have found it, inside the walls of Heald Funeral Home.

Established in 1918, the Heald Funeral Home is now in it’s 100th year. The family run business has passed through the hands of four generations. Raymond “Rett” Heald is the current director, having taken over after his father Howard “Bud” Heald retired and later passed in 2006.

Rett first jumped into the business in 1974 while in high school and has been working there ever since. “I’ve got a little pride in [the business], there’s a little history here,” Rett said, smiling, “We’ve been here a few years.”

A hundred years of history

Winslow D. Heald and his wife, Lottie (Bliss) Heald were the original founders of the Heald business, starting it as a horse and buggy delivery service. The family provided horse-drawn hearses and taxis throughout the St. Albans area.

According to Rett, it was around this time that one of the funeral home directors in the area passed away, and his wife wanted to sell the business. That’s when Winslow bought the first funeral home for the family, originally located on Kingman Street, before moving to Rugg Street where the King’s Daughters home now stands. The 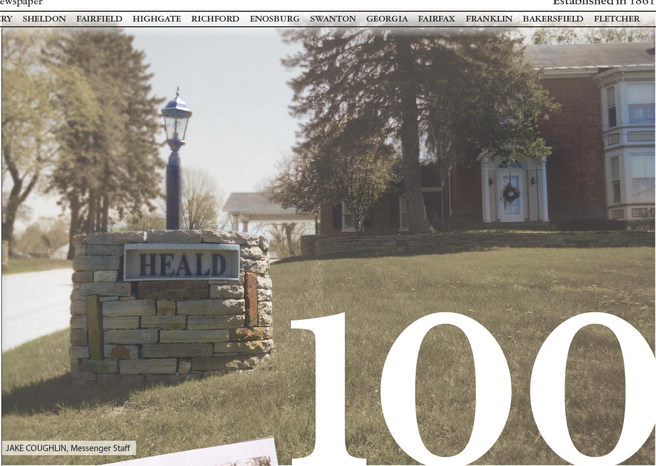 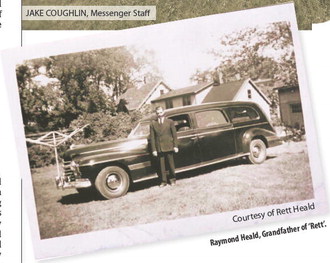 Winslow and Lottie had 11 children, but out of all of them only one, Raymond, decided to continue the business. He took over Healds after Winslow died unexpectedly in the mid 1940’s, explained Rett. That’s when Raymond purchased property on South Main Street. The family moved into the home at 87 South Main, which is where the current funeral home is now, and operated their business next door at 91 South Main.

On a quiet Sunday morning, June 11, 1961, while everyone was at church, flames were spotted coming from the Heald home. A kitchen burner, left unattended, ignited material inside the home, causing a fire that gutted out almost the entirety of the first floor. The fire was reported to have left nearly $20,000 in damages, but the walls, floors and ceilings of the Heald home managed to withstand the disaster.

After the fire, the Healds decided it was impossible to restore the home. Quoted in a 1964 Messenger article Raymond’s wife, Barbara Heald, said, “We just couldn’t fix it up because I would be trying to restore it as it was and I knew that was impossible.”

So the Healds decided to move into a home they owned on Rugg Street. According to the article, the family, after much consideration, then decided to renovate and redecorate the damaged home, and transfer the funeral home there. The building itself was built in 1822, and is one of the oldest buildings in St. Albans. Some of the charring from the ‘61 fire can still be seen if one looks closely at the front staircase inside the funeral home.

Raymond passed along his business to his sons, Howard “Bud”, Rett’s father, and Winslow “Win”. Eventually Rett entered into the business as well, and that’s when business really started to pick up.

For Rett, one of the main attractions of the family business was the ambulance service the Healds once ran.

“We did accidents, transports between nursing homes and hospitals, or home to hospital. We didn’t have much of a life back then, we were doing 1,300-1,400 ambulance calls a year, plus 60 funerals a year,” Rett said.

The family did all of this with one ambulance and one hearse. Eventually the financial cost wasn’t worth the return, and they made the decision to just focus on the funeral business.

“We just had no life, and it came down to a family decision, and here we are now,” Rett said.

“It’s like planning a wedding, except usually you have a year to plan a wedding. We do it sometimes within a week,” Rett said.

With the time limit demands and the uncertainty of when the next call will be, the funeral business is a 24/7 job. Rett said he’s spent many Christmases or Thanksgiving dinners away from his family because the phone rang and he answered it.

“It’s not like we can take the phone off the hook on a Friday night and say we’ll come back on Monday and see what we got, you can’t do that. We’re here to serve the people, at all times,” Rett said. “When the phone rings, you need to go, and you go.”

Rett credits his success largely to an understanding family and a hardworking staff.

“I got a great staff, probably the best staff around. They are serious about it and they are committed to it, and that’s a plus in this business,” Rett said.

His wife, Emily, though not an official staff member at Heald, does just as much work there as anyone. Between a job at Northwestern Medical Center, Rett says she does all of the decorating, book keeping and renovation designs at the home.

“I don’t have this,” Rett said as he pointed out the flower décor and comforting feel of the funeral parlor, “She’s got a lot of energy. Emily’s the backbone of this place.”

Keeping a funeral home in business is not an easy thing. That’s a fact backed up by the recent decline in funeral homes throughout the Franklin County area. According to Rett, St. Albans once was served by five or six different funeral businesses. Now there’s just two.

“Things change, these are the funeral homes that have made it, and it’s because of the services they provide to the families,” Rett said.

The funeral business has changed considerably since the first Winslow Heald launched the operation. It’s something Rett has seen throughout his 44 years working alongside the family. He says more and more families are shortening funeral services, or skipping services all together.

“When I first started there used to be two days of visiting hours, but now it’s just a couple of hours,” Rett said.

Though he isn’t able to pinpoint the exact reason why funerals have changed, Rett cites money, family dynamics and possibly changing religious values as some of the contributing factors.

“It use to be when the phone rang you would know you were going to be doing a funeral of some type, now you don’t know what’s going to happen, it’s whatever the family would like,” Rett said.

“That’s what it’s all about, the service,” Rett said.

One of the most unique ceremonies the funeral home planned was a wedding and funeral combined. A young couple was killed in an auto accident as they were eloping to Montreal from Boston. The family was from China, and requested to have a minister present. The brother of the groom and the sister of the bride stood in for the couple, with their caskets close by. The funeral followed shortly after. The whole day was filmed for the family, and they took home the cremated remains and the film with them back to China.

“It was different, but that’s what they wanted to do. And we were here to make that happen,” Rett said. “That’s part of the job, you have to be there for these people because they are relying on you to take care of their loved one and we make sure things are carried out the way the family would like.”

Grieving in their own way

With four generations born and raised in St. Albans, the Healds have seen a lot of their family and friends come and go. Working in the funeral business is a tough job and dealing with grief day in and day out is never easy. But Rett wants people to know the family still mourns in their own way.

“Sometimes we grieve differently than other people because we have to be there to serve those families, but we still have our moments,” Rett said. “We still grieve, we’re human.”

Perhaps the hardest part about the job, Rett says, is dealing with the deaths of young children. It’s something he’s seen more and more of recently, and it’s heartbreaking. But as a funeral home, the job requires them to put aside their grief, and be able to comfort these hurting families.

What the future holds

As Rett guides the funeral home into it’s 100th year, he says the home is approaching a crossroads.

“I’m the fourth generation and the last. I don’t have anybody coming up behind me that’s going to take it over,” Rett said.

With two grown children with set career paths, Rett knows he’ll have to make a decision one day for the future of the business. But it’s something he says he’s not ready to think about just yet.

When the time comes to make a decision for the future of Heald Funeral Home, it’s one that won’t be made lightly. A legacy is left behind at 87 South Main and there’s a sense of lasting pride surrounding the history that’s been made there. 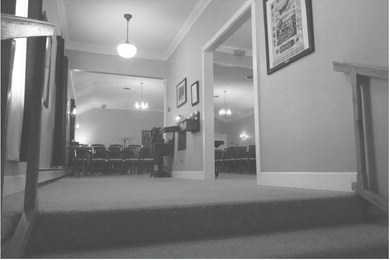 The inside of Heald Funeral Home.

Click here to see this page in the eEdition: